In the ActionMaker, you can create custom weapons. A weapon is a set of elements combining several visual effects, and an almost complete customization of the gameplay values and effects.

We'll learn how to create a weapon by making a sort of... kamehameha!

Creating the basic settings of the weapon 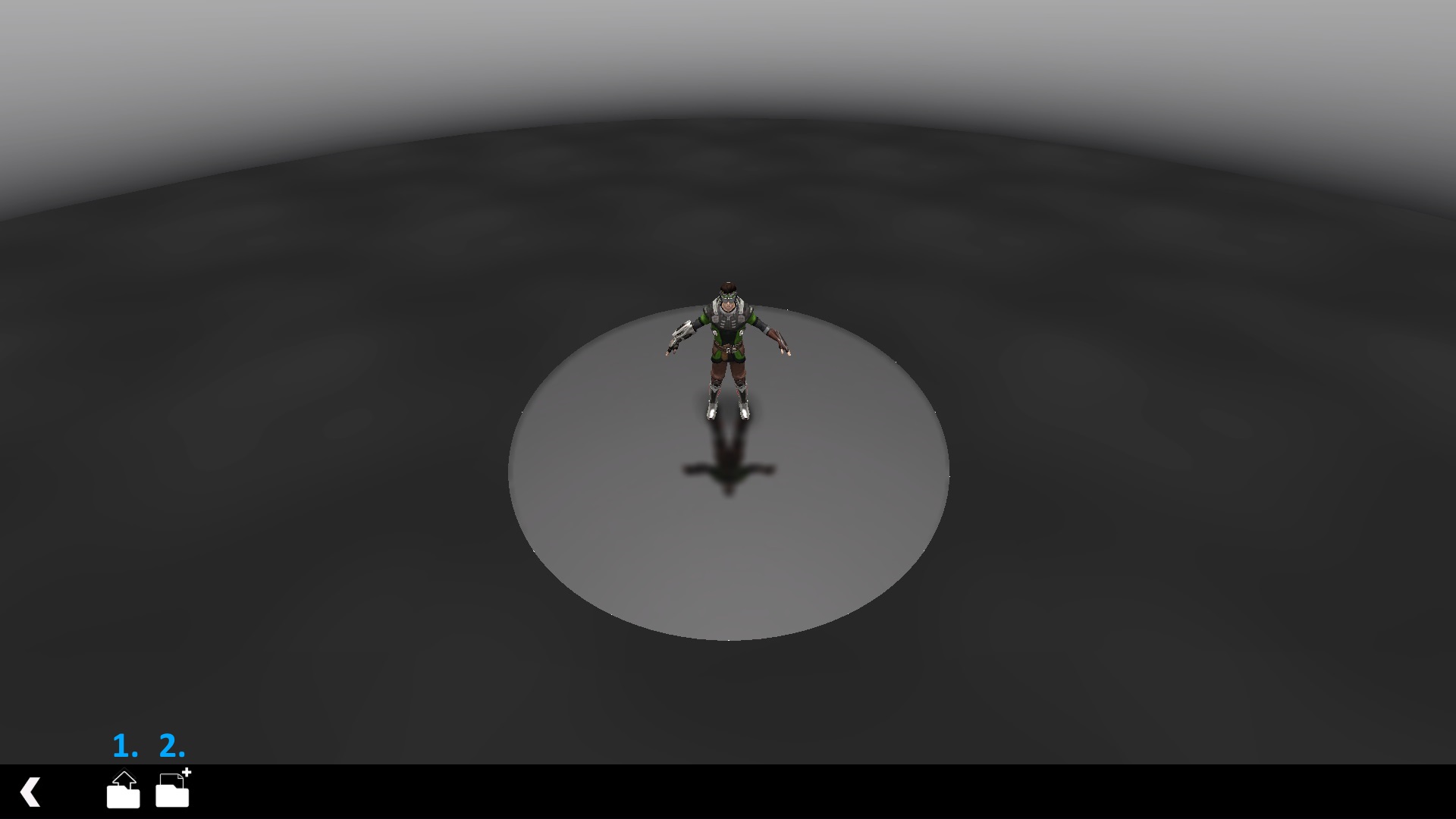 First you have to create a new weapon by clicking on the second icon at the bottom of the screen and then you choose to create a weapon. 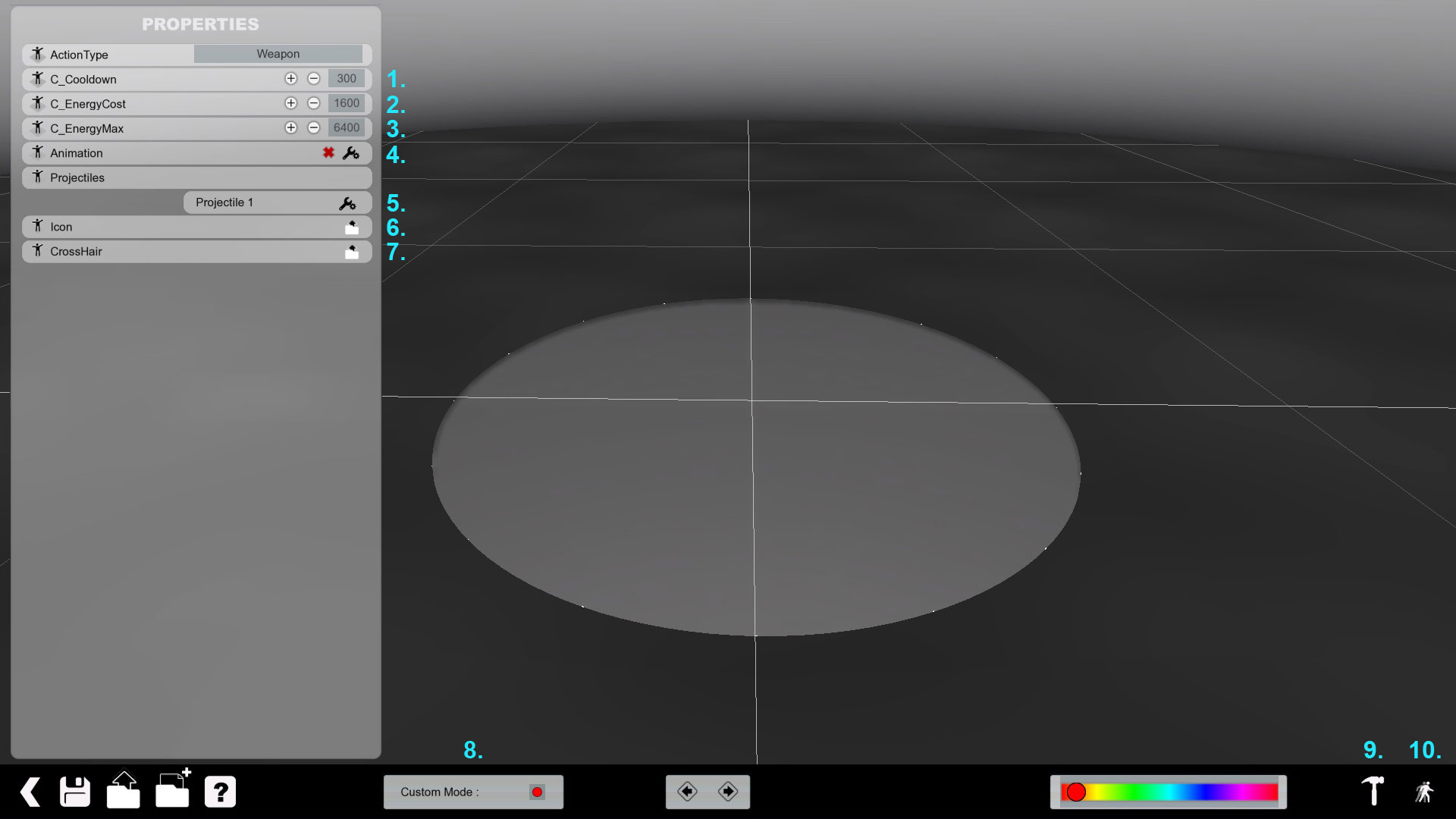 Usually you will set the first three parameters and after that you'll start to customize your weapon. 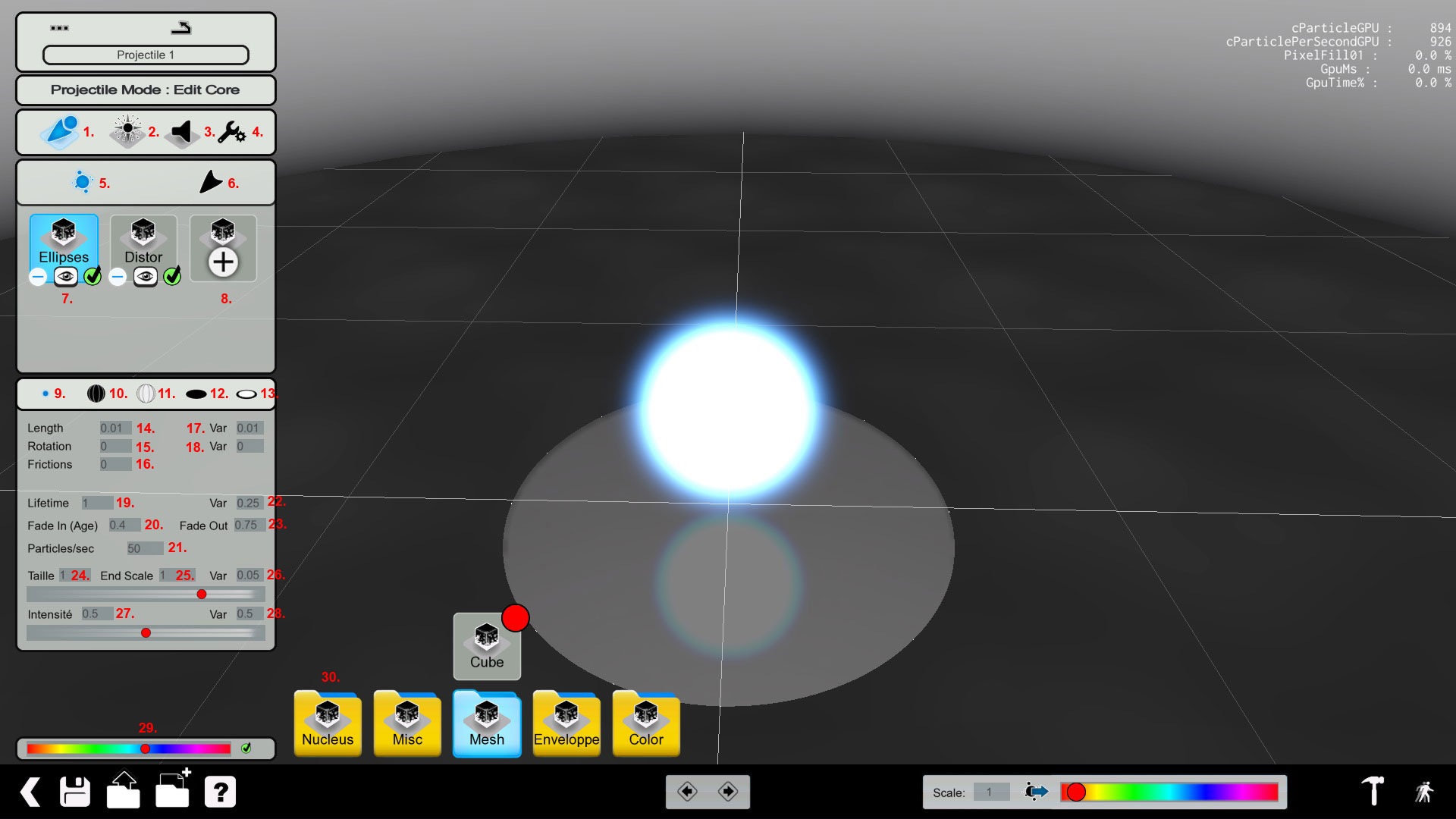 You'll have the interface for creating the core of the weapon, the initial visual design.

So to create a Kamehameha with the ActionMaker, we have first to create its core, the "heart" of the effect.

The options 14., 15. ,17. and 18. may change according to the shape used (mostly for the disc/circle shape for equivalent fields). We assume that the fields have a value of 0, that way i name only the fields which are modified.

First create the core with the Dots effect with the current settings:

Then we add a Distor effect to give a more living effect to the bullet when it'll be fired with the following parameters:

With those settings now we really have the impression to have an DBZ-like energy ball. 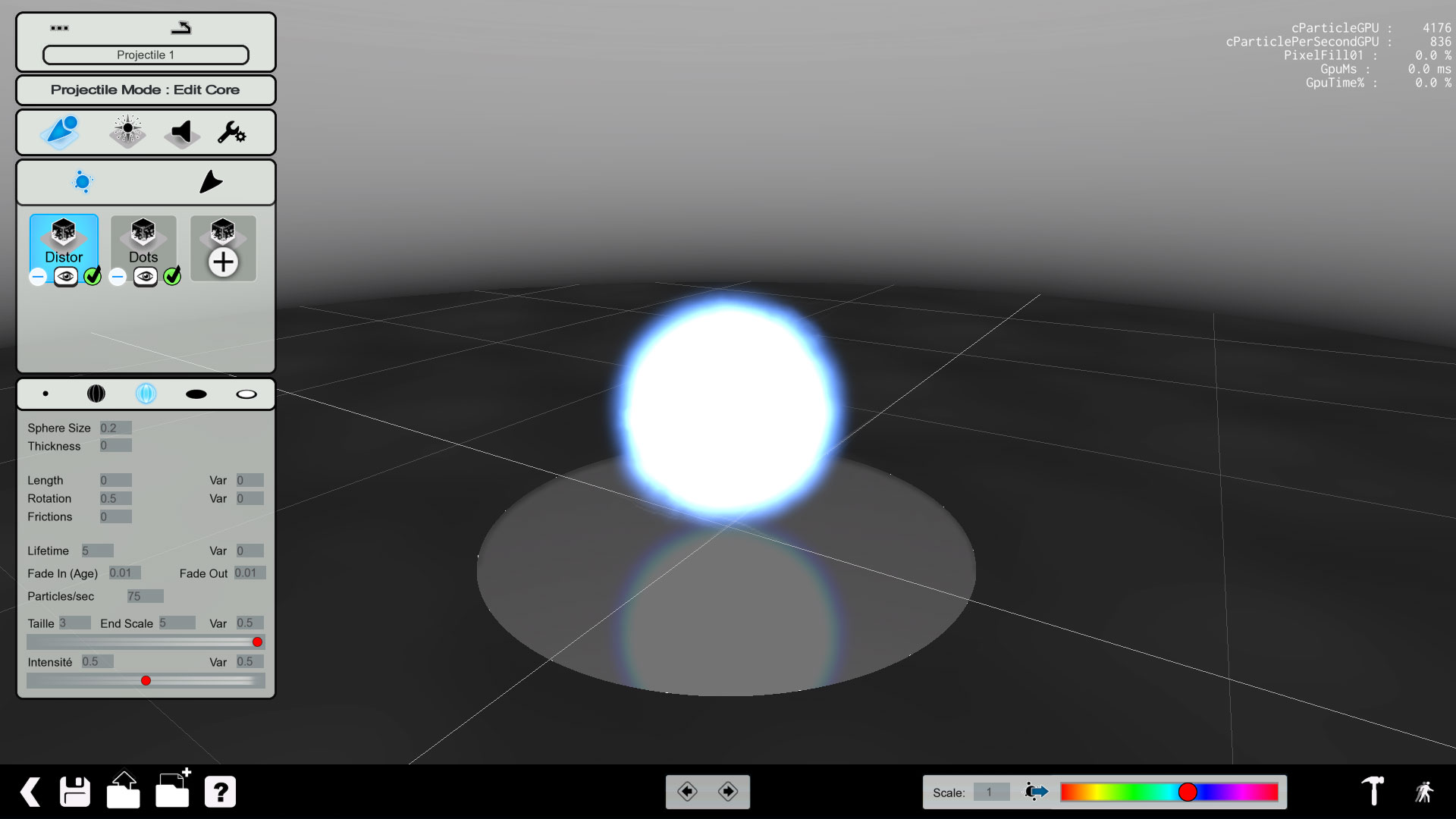 Those settings allow us to have a quite stable core in terms of looks for the purpose we have.

The creation of the tail of the weapon is almost the same as the core except a few different options:

And now the parameters for a Kamehameha tail style with a Dots effect!

Now you can see the result of the projectile by loading the test map by clicking on the bottom-right of the screen or simply the travel icon between the global colorization tool and the global scale parameter at the bottom on screen. 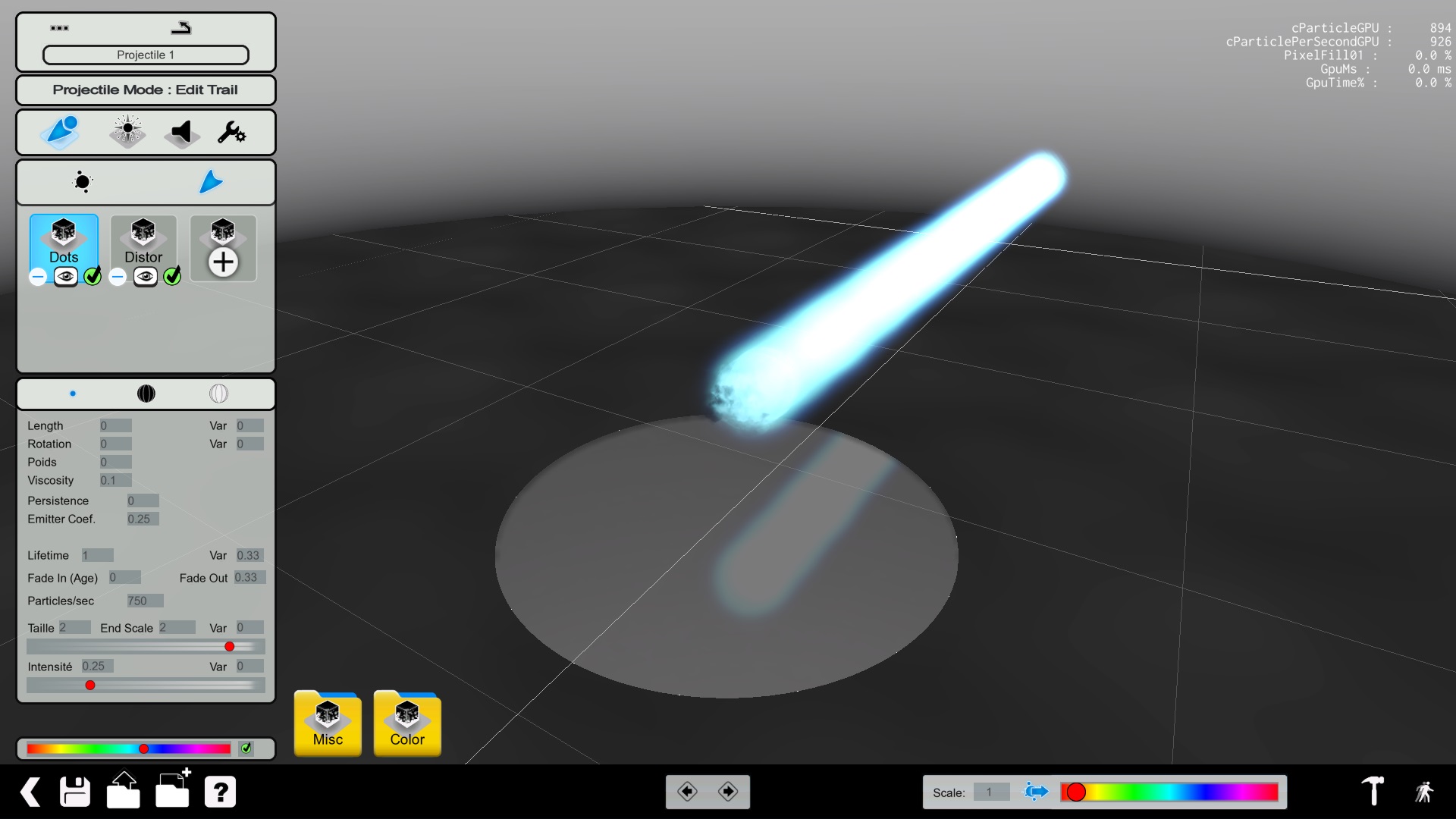 Time to explode everything

Now that our projectile is ready, it's time to customize the style of the explosion. We'll create its power first.

The power is the visual effect of the impact of the projectile on a player or any solid object in the world.

I've got the power

As usual, most of the parameters are identical like the previous ones, with very few changes:

It's time to setup the power of the explosion:

The result is a okay-ish explosion power style. 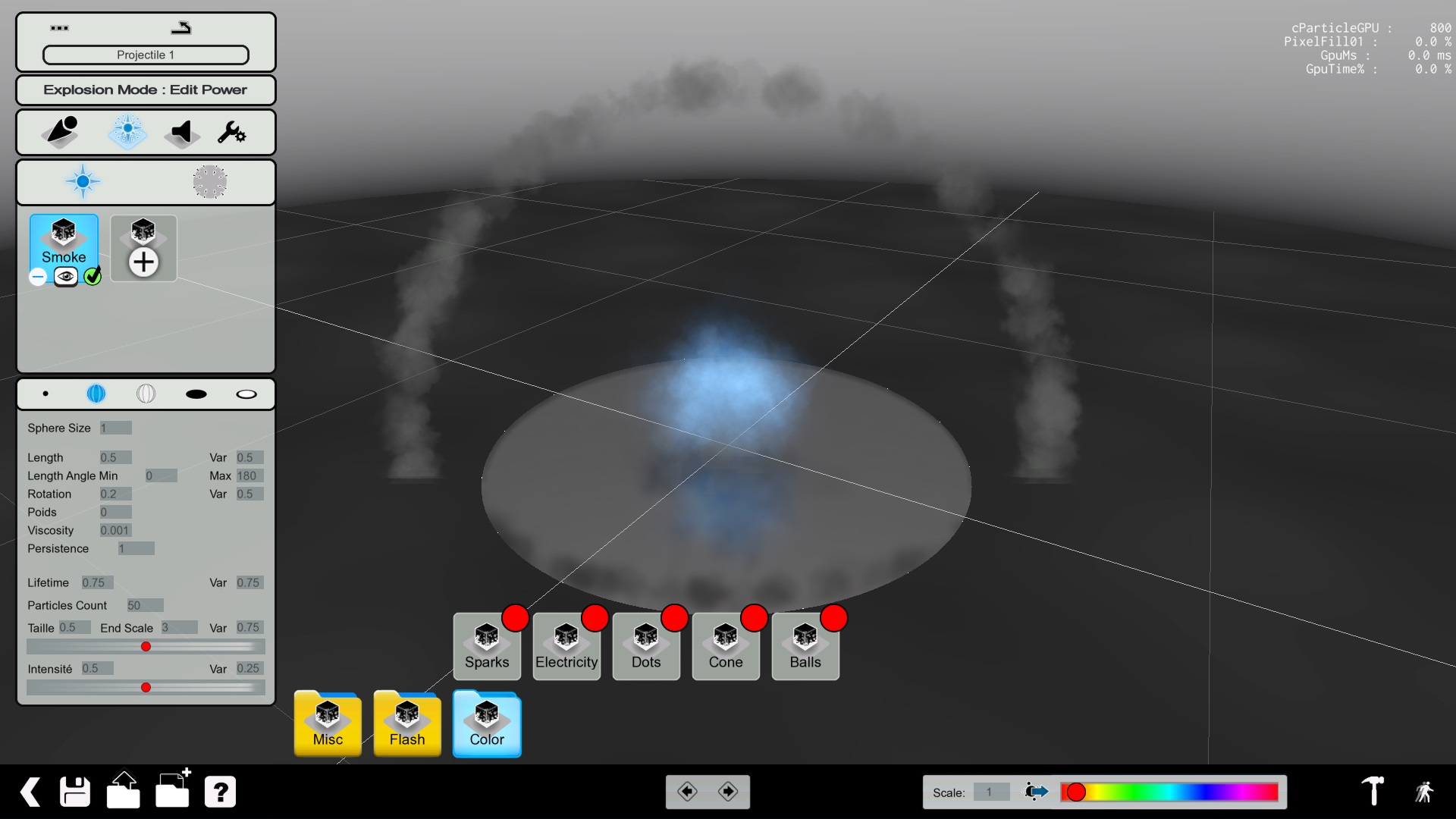 We can create also an effect, the debris, which is like the ground blast of a nuclear weapon. Personally I choose a medium disc blast effect like... nuclear weapons! 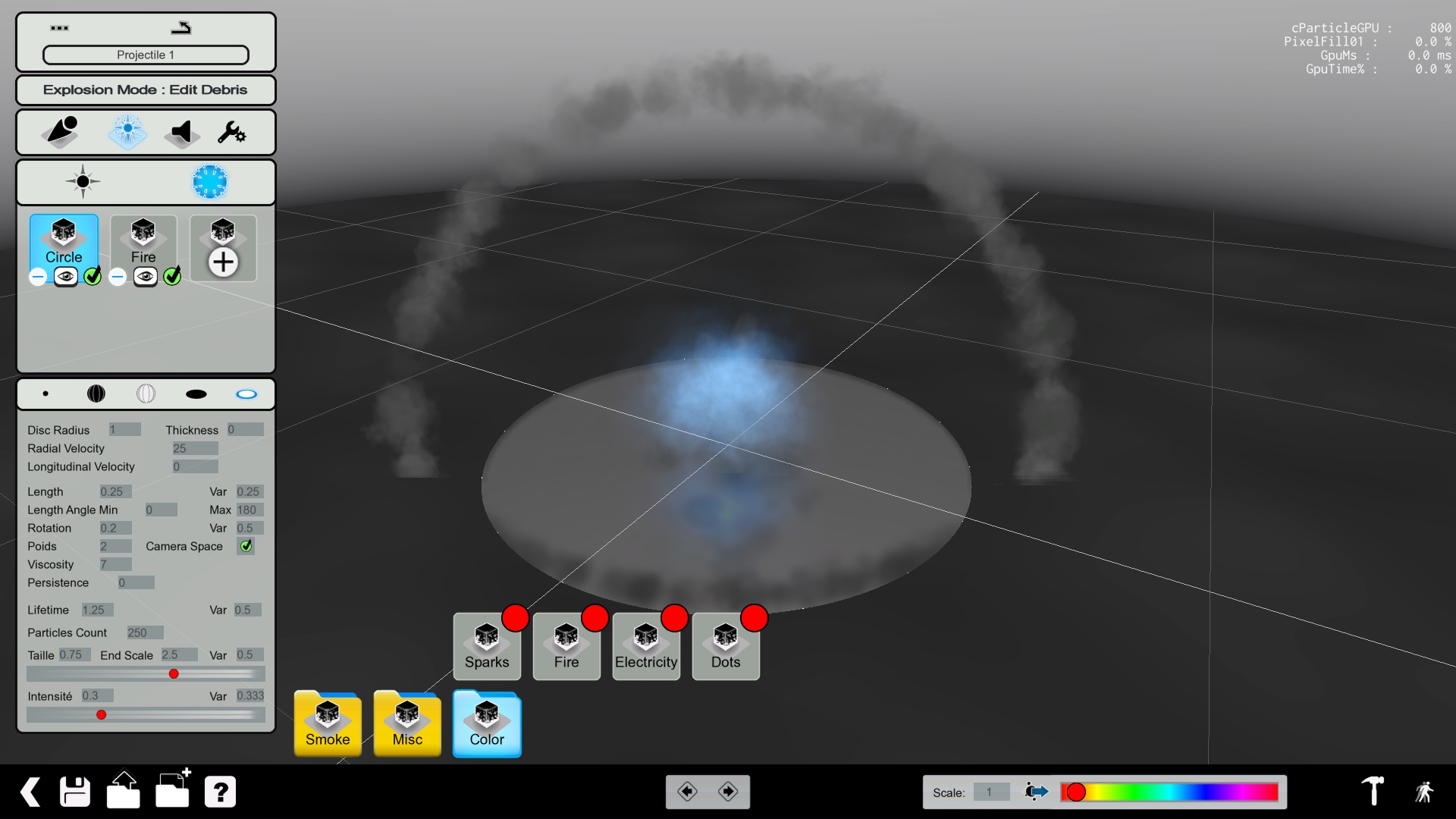 This part is quite simple, you have to choose a sound for each sequence:

For the moment you're limited to the sounds listed in the library.

Last part but not the least: the gameplay

Of course this is one of the most important parts of your projectile, maybe the most, the gameplay mechanics of your weapon.

This tab is separated by two tabs: Bullet and Explosion.

The first one indicates the gameplay behaviour of the bullet and the other the explosion itself.

Let's see the options for the bullet:

And there are several movement patterns if you don't want to only have a straight forward bullet with each of its parameters.

The few parameters where you need explanations are:

For our weapon, we'll enter the following values: 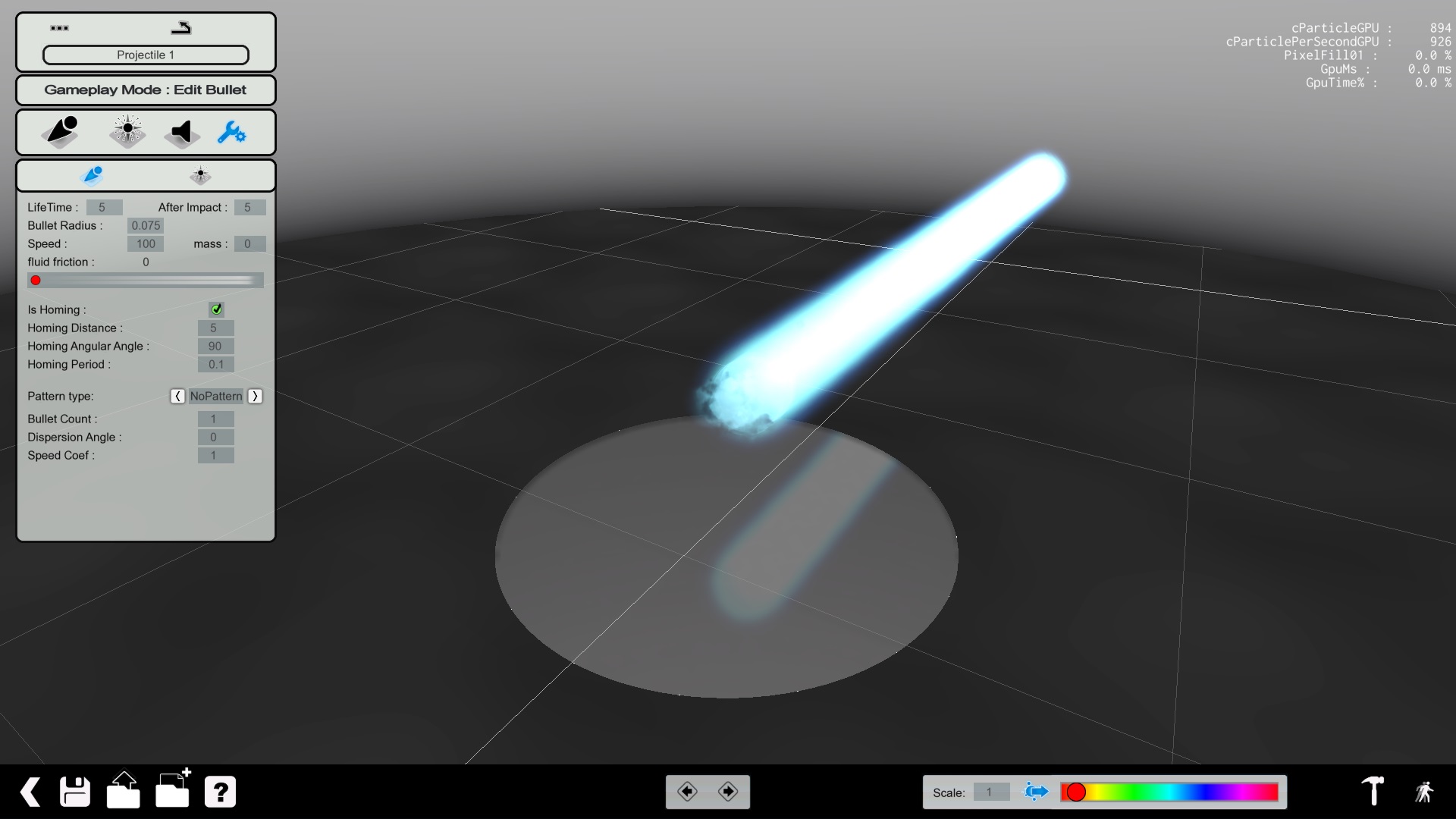 Now that you've setup the bullet, you have to configure the explosion.

And now the settings for our weapon: 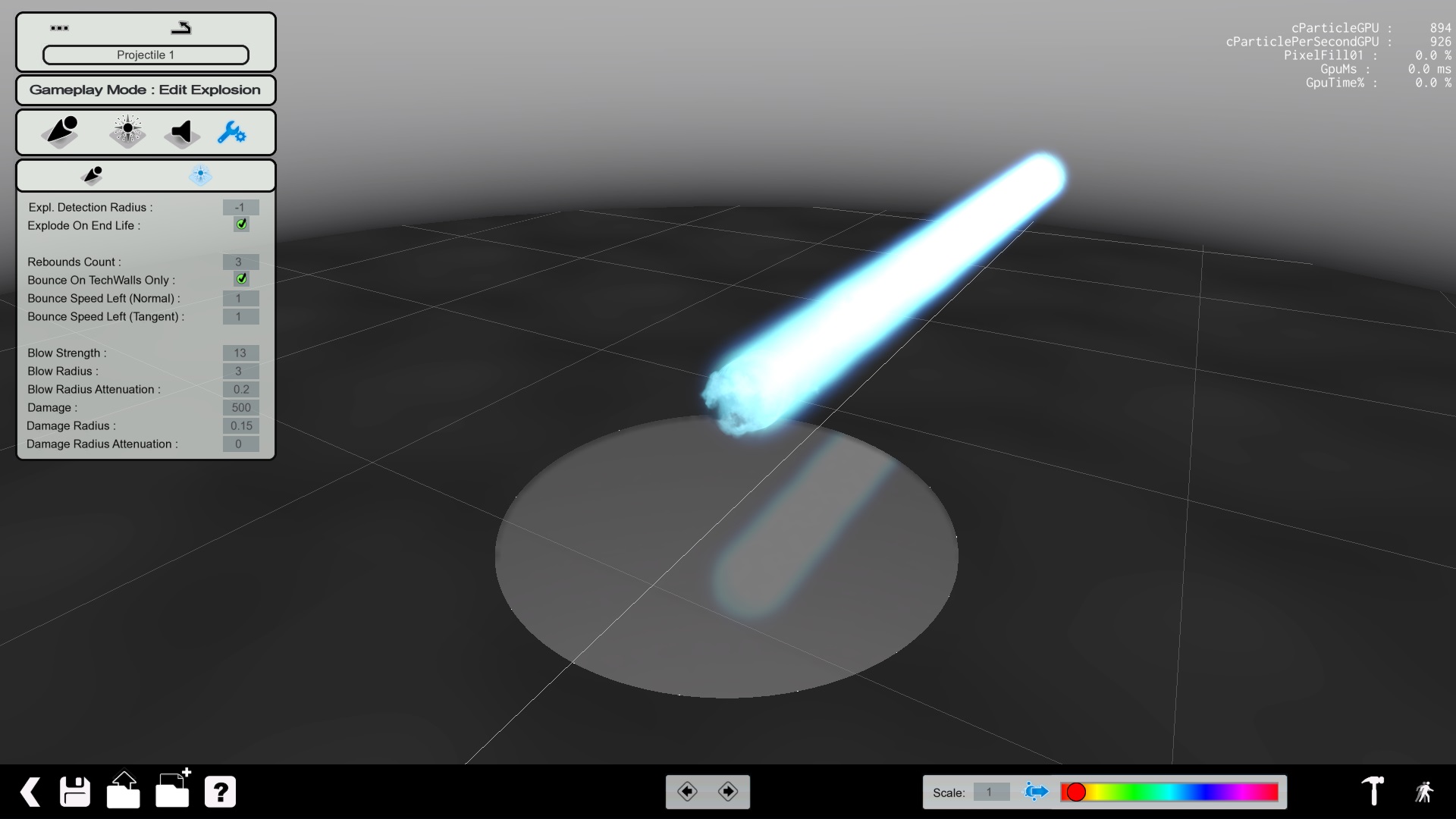 Now you have a fully usable kamehameha (but quite overpowered ^^)!

Avoid to have a too high number of particles, if you do that, when several players will play, there is a high risk that they will suffer of performance issues caused by the high amount of particles. For example the Storm rocket uses around 10 000 particules by bullet. So keep it as low as to maintain good performance for all the players.